Building an Elite System of Gameday Communication For Your Offensive Staff 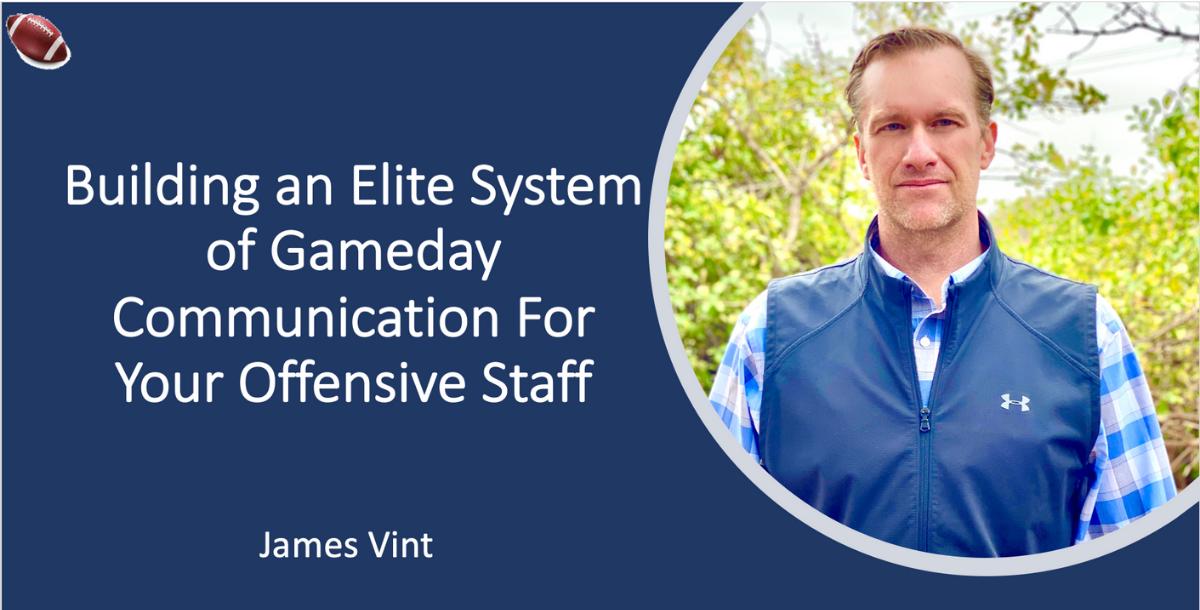 Most coaches put the headsets on and expect communication to happen naturally. Unfortunately, this is not the case. Poor communication practices results in offenses underachieving at all levels of football. This course will give you a systematic process for in-game communication with your offensive coaching staff that will help you score more points and win more games. Coach Vint will give you exactly what it takes to build your game day staff responsibilities. He gives you a specific process focusing on what to watch, what to say, how to say it, and when to say it. His communication process will involve your coaches and help them to be more invested. This information will help your coaches to be on the same page and communicate at an elite level! This course is a must have for coaches at all levels to learn how to use communciation to be more efficient and explosive on offense.

As a defensive coordinator Vint led one of the biggest defensive turnarounds in the state. He took over a defense that gave up over 40 points a game, and posted 6 shutouts in his first season. His defense gave up just 6.8 points a game and 90 yards per game rushing. They posted 98 tackles for loss and over 40 sacks. His multiple 3-3 stack defense is being used by programs all over the country.

Vint is known as one of the top football minds in the game today, and is a recognized as one of the top clinic speakers in the country. In 2019 he was named the Assistant Coac of the Year by the Texas Tech Chapter of the National Football Foundation.

When you hear that James vent has post today coach tube video, you watch it. Great content. Good for any head coach or coordinator.

Coach Vint always drops great knowledge and this is no different. Very easy to understand process to streamline communication on sideline. This will make your team better and more effective on Friday nights.

Coach Vint has done it again. If you've read his books or have seen him present, you know the depth and understanding that he puts into his work so any program can apply it to fit their needs. His Gameday Communication course is very thought out and presented in a way that is easy to follow and he explains the WHY it is needed for success. All coaches can get something to think about from this course.

Tempo Plays and One Word Calls In Your Offense by Terrance Banks
Views: 3205
$9.99