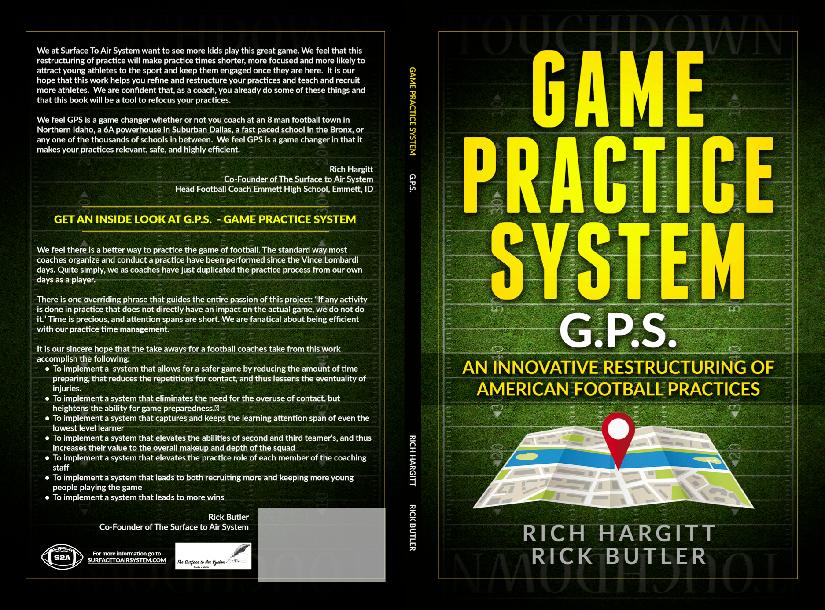 We feel there is a better way to practice the game of football.

The standard way most coaches organize and conduct a practice has just been copied and pasted since the Vince Lombardi days. Quite simply, we as coaches have just duplicated the practice process from our own days as a player. Schemes have changed, players have changed, and society has changed. But, practices for the most part have not.

CONTENTS OF THIS COURSE:

Rules and explanation for S27

This book will attempt to convey why S2A Game Practice System (GPS) is an “edge of the knife” way to conduct a football practice. The Surface to Air System (S2A), is an offensive consulting service. This book will detail our thoughts from our offensive perspective, but the principles can be applied to all three phases of the game (Offense, Defense, Special Teams). In introducing this “outside the box” way of looking at something new in the game of football, we challenge you as a coach to take this information and determine if there’s truly a better way of doing things.

Ask yourself, “Is the way we’ve been conducting practices since I was a player really the most effective way?” Offenses have evolved, the passing game has evolved, and off-season methods of training have evolved. Why hasn’t practice evolved?

The objective of this book is to make football a better game through the utilization of S2A GPS. It is our specific objective to check the following boxes when developing this practice method:

-Get more kids out for football

Again, we check those boxes with our main tenant: “If any activity is done in practice that does not directly have an impact on the actual game, we do not do it.”

It is our sincere hope that football coaches will take from this work the following:

-To implement a system that allows for a safer game by reducing the amount of time preparing, that reduces the repetitions for contact, and thus lessens the eventuality of injuries.

-To implement a system that eliminates the need for the overuse of contact, but heightens the ability for game preparedness.

-To implement a system that elevates the abilities of second and third teamers, and thus increases their value to the overall makeup and depth of the squad

-To implement a system that leads to more wins

In 2010, he earned a Master of Arts Degree in Physical Education with Coaching Specialization from Ball State University. Hargitt’s teams have utilized the Air Raid Offense with an emphasis on RPO’s to upset several quality teams throughout the past several seasons. The offense has produced multiple school records in North Carolina, South Carolina, and in Idaho for points, passing yards, and touchdowns.

The Surface to Air System (S2A) is Hargitt’s latest offering for football coaches. S2A is an offensive consulting service for coaching staffs wanting to increase their offensive outputs and win more games. Since its inception in 2017 the service has grown to help coaching staffs in 41 States, and has a presence at four Universities. Recently S2A has spread to 3 continents (Japan, Australia, South America), and has several clients spread out over Canada and Mexico.

Hargitt accepted the Head Football position at Emmett High School in Emmett, Idaho in the Spring of 2018. Hargitt’s Emmett HS team finished 1st in the Idaho AAAA classification in pass attempts (242), pass completions (394), and passing yards (2,656 yards). Hargitt resides in Middleton, Idaho with his wife Lisa and their sons Griffin and Graham.

Coach Butler’s latest passion is The Surface to Air System (S2A) in which he is co-founder with Rich Hargitt. S2A is an offensive consulting service for coaching staffs wanting to increase their offensive outputs and win more games. Since its inception in 2017, the service has grown to help coaching staffs in 41 States, and has a presence at four universities. Recently S2A has spread to 3 continents (Japan, Australia, South America), and has several clients spread out over Canada and Mexico.

Rick now resides in Monterey, CA with his wife Leslie and dog Henry. Rick claims Leslie  as his first girlfriend dating back to 1978. Rick and Leslie have eight children between them along with three grand children.