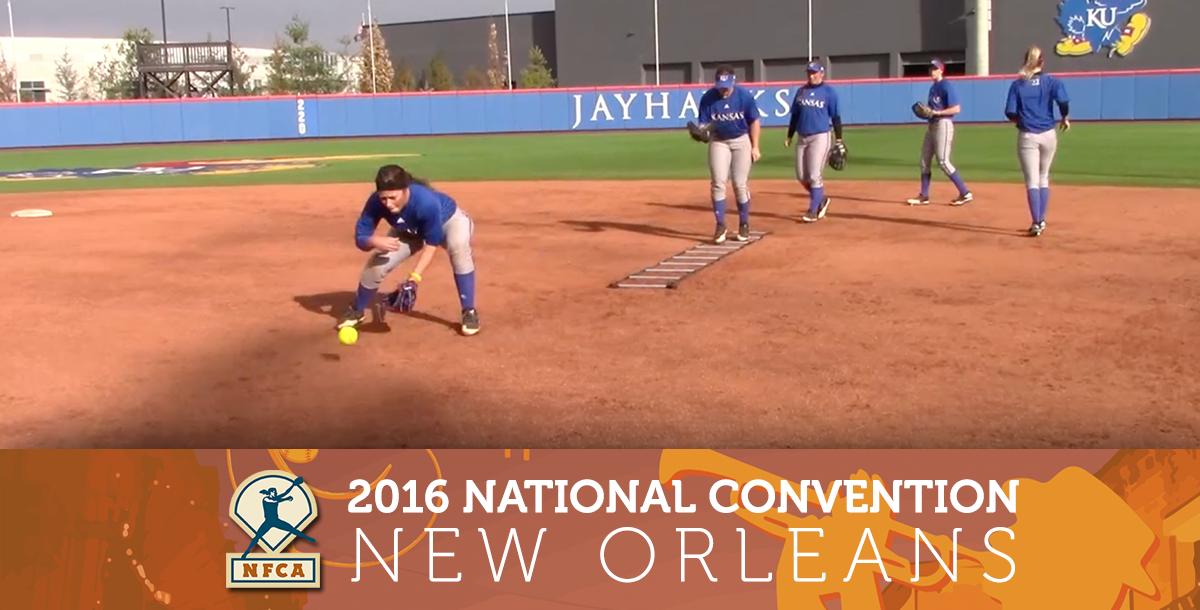 Megan Smith completed her seventh season as head coach of the University of Kansas softball team in 2016. The eighth head coach in program history, Smith guided the Jayhawks to their sixth-straight 30-win season in 2016. Smith, who previously spent three seasons as an assistant coach at perennial power Louisiana State University (LSU), was named the Jayhawks' head coach on June 24, 2009.
In 2016, Kansas enjoyed another record-breaking season under Smith. Along with reaching the 30-win plateau for the sixth year in a row, the Jayhawks’ pitching staff saw a hurler toss a no-hitter for the fourth-consecutive season. Sophomore Andie Formby threw the 26th no-no in program history during the 2016 campaign following a nearly 29-inning scoreless streak.

Formby wasn’t the only Jayhawk to etch her name in the record books in 2016 under Smith’s guidance. Senior shortstop Chaley Brickey began her final season in the Crimson and Blue by claiming KU’s all-time base on balls record and by the time her career ended she became Kansas’ all-time RBI, runs scored and slugging percentage leader. Brickey was also the second Jayhawk under Smith’s tutelage to be selected in the National Professional Fastpitch draft, and fourth Kansas player overall, as the Pennsylvania Rebellion chose her as the 16th overall selection in the third round.

In her seventh season at the helm of Kansas softball, two Jayhawks earned All-Big 12 honors while four earned National Fastpitch Coaches Association (NFCA) All-Region accolades. Brickey became the second Jayhawk to earn four All-Big 12 honors while freshman Alexis Reid earned a spot on the league’s all-freshman squad. Brickey, Formby and Shannon and Erin McGinley each garnered all-region recognition at the conclusion of the 2016 season. In addition to multiple postseason honorees, Smith saw five Jayhawks acknowledged for their efforts in the classroom with Academic All-Big 12 honors.

The Jayhawks’ RPI has continued to rise under Smith’s guidance. When she first took over the program in 2010, KU had an RPI of 93 and in six short years it has soared into the 20’s. In 2015, Kansas once again reached new heights under Smith’s tutelage after posting an RPI of 23, the highest in modern RPI history.

Before taking over the reins at Kansas, Smith helped lead the LSU softball team to the NCAA Tournament all three years she was on staff.

Prior to LSU, Smith served as the head coach at Western Carolina in WCU's inaugural season in 2006. There, Smith orchestrated a storybook season in which the Catamounts compiled a 41-20 record, including a 16-4 conference mark that earned them the regular-season championship and warranted conference coach of the year honors for Smith. The Southern Conference also awarded Smith's players with conference pitcher of the year and freshman of the year accolades, while six Catamounts were named all-conference, including five selections on the first team.

Smith began her coaching career at Young Harris College in Georgia where she compiled a 79-41 record in two seasons as head coach of the Mountain Lions from 2001-02. Without an assistant, Smith was responsible for all aspects of the NJCAA Division I program.

Kim Dunlap Borders is in her eighth season as an assistant softball coach at Campbellsville University, working primarily with pitchers. Borders is the owner and pitching instructor at BSA Softball Academy in Scottsville, Ky.

During her playing days, Borders was a four-time high school All-American while leading Ezell Harding Christian School in Nashville, Tenn., to four state championships. She also led her summer team to the ASA 18 National Championship in 1997. In College, she was a two-time All-Region selection at the University of Louisiana at Lafayette, while helping the Ragin' Cajuns to four straight NCAA regional appearances. She was named the Sunbelt Conference Pitcher of the Year in 2000 and was a National Fastpitch Coaches Association (NFCA) Scholar-Athlete.

Following her collegiate career, she returned to Club K, where she formerly trained 10 years under Cheri Kempf. She instructed and trained hundreds of pitchers over a five-year span before starting BSA.

Nuveman Deniz, a three-time U.S. Olympian, brings a host of softball experience and accolades to The Mesa.

In the spring of 2010, Nuveman Deniz served as an assistant coach for the Women's National Team Selection Camp, at the Canadian Open Fast Pitch Women's International Championship and at the World Cup of Softball VI.

In 1999, Nuveman led the Bruins to a national championship, batting .446 during the season with 31 home runs and 91 RBI. For her efforts in the national title run, Nuveman was named to the all-Women's College World Series team.

In addition to her on-field accomplishments, Nuveman also works with several organizations, including the Visalia Miracle League, the Women's Sports Foundation, and the Make-a-Wish Foundation.