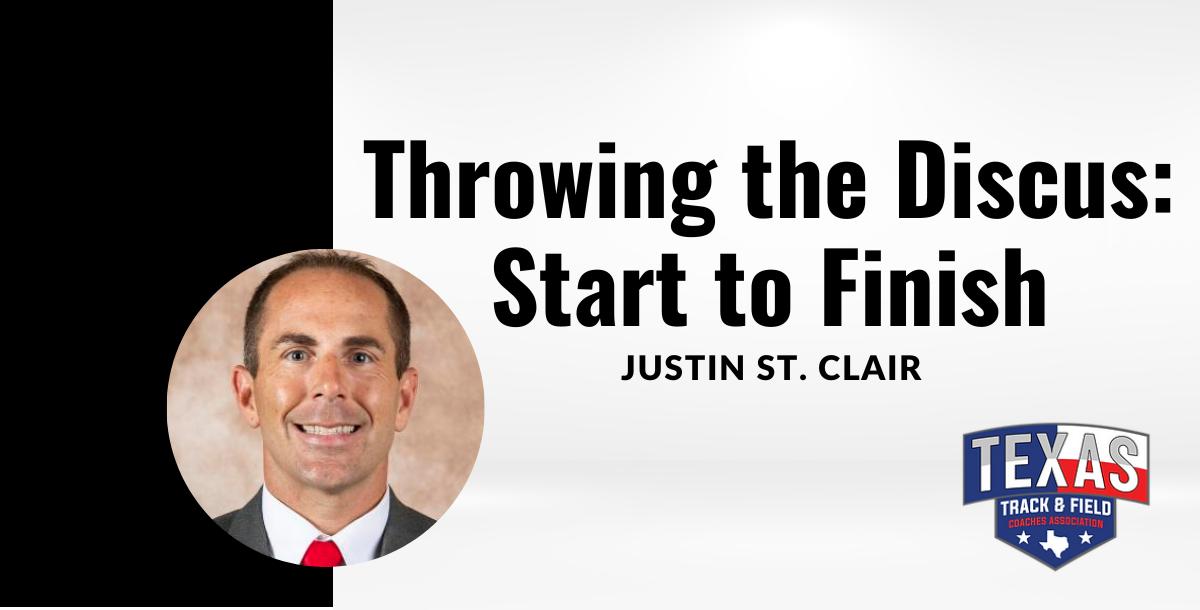 In this course Justin St. Clair breaks down the discus throw in a way that all coaches can understand. He starts with the 5 aspects that make up his view of the discus technical model. He then walks coaches through the 7 key applications of his technical progresion. Each stage of the throw is discussed as to what key elements are important and what to look for at each stage. He finishes the presentation with drills to use to help your athletes and video analysis of certain technical positions necessary to achieve proper throwing mechanics.

Justin St. Clair was named the associate head coach and throws coach for the Huskers in the summer of 2021.

St. Clair came to Nebraska after 10 years as arguably the nation's best throws coach while at North Dakota State. He has been voted the USTFCCCA Midwest Region Assistant Coach of the Year nine times since 2016 - five times indoors and four times outdoors. In 2019, St. Clair was voted the National Assistant Coach of the Year for men's indoor track and field, and he followed that up by being one of three national finalists for the women's award in 2020. He was promoted to associate director of the Bison track and field program in August of 2020.

St. Clair coached NDSU's Payton Otterdahl to the 2021 Olympic Games, NCAA titles in the indoor shot put and weight throw in 2019, becoming only the second man ever to sweep the NCAA titles in the indoor throwing events. Otterdahl set the all-time collegiate record in the indoor shot put on his way to becoming a semifinalist for The Bowerman. During the 2021 indoor season, St. Clair was named the USTFCCCA Midwest Region Assistant Coach of the Year for the eighth time after guiding five NDSU throwers to first-team All-America honors at the NCAA Indoor Championships.

For the abbreviated 2020 season, St. Clair coached Moton, Gunnells and Nilles to return trips to the NCAA Championships, and the Bison women were dominant at the Summit League Indoor Championships. NDSU scored 66 of a possible 78 team points in the two throwing events, finishing 1-2-3-4-5-7 in the shot put and 1-2-3-5-7-8 in the weight throw.

On the women's side, NDSU scored 120 of a possible 156 points in the throwing events at the 2018 Summit League Championships. Six different Bison women finished the season ranked among the NCAA's top 50 in throwing events, and NDSU became the only team in the nation with five women over 15 meters in the shot put.

St. Clair's athletes were also highly regarded on the national scene in 2018, with Payton Otterdahl owning the nation's top collegiate shot put mark and Alyssa Olin ranking second in the NCAA in the javelin. In addition to Olin and Otterdahl, St. Clair guided Maddy Nilles (hammer), Matti Mortimore (javelin) and Alex Renner (shot put) to top-10 finishes at the NCAA Outdoor Championships in 2018 and 2019.

The Bison men and women broke nine of a possible 12 school records in the throws in the 2016 season alone – and every school record on the books was re-broken since January 2016.

In 2015, St. Clair coached Mortimore to a seventh-place finish in the javelin and freshman Austin Schmidt to 16th in the javelin at the NCAA Outdoor Championships -- at the time, the two highest NCAA Outdoor finishes in NDSU's Division I era. On the women's side, he directed Sierra Rosenau to the first Division I national meet appearance by a Bison woman in a throwing event.

The 2015 season was also an extremely successful one for St. Clair's athletes on the national and international track & field scene. St. Clair coached NDSU freshman Payton Otterdahl to a USA Junior national championship and a Pan American Junior title in the discus, and he also directed NDSU alum Riley Dolezal to his second World Championships appearance in the javelin for Team USA. St. Clair was the throws coach for Team USA at the World University Games held in South Korea.

Along with directing the historic success of the NDSU student-athletes, St. Clair re-entered the international track & field scene as the coach for 2013 USATF javelin champion Riley Dolezal, a 2009 NDSU graduate. Dolezal won the national title in the javelin at the USA Outdoor Championships in June 2013 with a mark of 273-11 (83.50m) – the best throw by an American in four years and enough to rank Dolezal eighth in American history. St. Clair was also named the throws coach of the Team USA Under-23 squad in the summer of 2014.

St. Clair made an immediate impact for the Bison in 2012, directing his student-athletes to 17 performances that ranked among the school's all-time top 10, including two new school records.