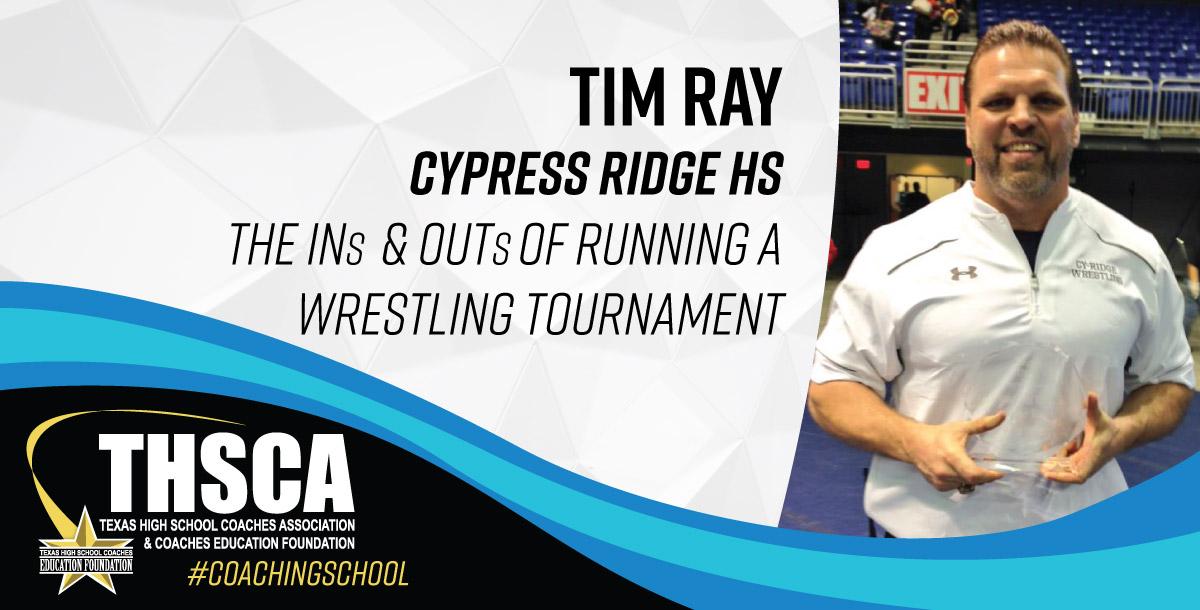 Lecture Title: The INs & OUTs of Running a Wrestling Tournament

Lecture Title: The INs & OUTs of Running a Wrestling Tournament

Tim C. Ray, Head Coach: This is Coach Ray’s 20th year at Cypress Ridge.  He started the wrestling programs in CFISD in 2002.  For the first three years he was the Head Coach of all 7 CFISD high schools.  Since starting the wrestling program here at Cypress Ridge his teams have won 16 district championships, 3 regional & 2 State Championships.  He’s been the Texas Wrestling Coach of the year in 2015 & Region 3 Coach of the year 3 times.  He has also been the President/Vice of the Texas Wrestling Coaches Association from 2009 to 2013.  Coach Ray was on the Wrestling Advisory committee for the Texas High School Coaches Association from 2013-2016.  He was elected to the Texas Wrestling Hall of Fame in 2018.  Before coming to Cypress Ridge, he started the wrestling programs in Killeen ISD were he was the Head Wrestling/Football Coach of Killeen Ellison High from 2000-2002.  Coach Ray started his Coaching career 1997-2000 at Northwestern Oklahoma State University as the Head Strength & Running backs Coach. In 1999 NWOSU won the NAIA National Football Championship.