Now that you've covered the infield, it's time to move to teaching the basics of outfield play. This, too, is a difficult skill to master because most beginners have probably never judged a ball in the air before.

You'll notice the time for the warm-up has increased. That's because we're adding more to the process. Stretch, form your throwing lines and send them on a run (start making them sprint the last 20 yards or so of the run, and warn them not to finish last. There's no penalty, of course, but they don't know that).

Keep your players hydrated with a water break. But have them hustle back on the field.

Review the infield mechanics: set position, fielding position, accepting the ball, step-through and throw. Set up the two lines, at second base and shortstop, and have them field as many ground balls as possible. Constantly stress the proper mechanics. Next, set them at the different positions. Start hitting balls and have them make the throws.

Keep your players hydrated with a water break. But have them hustle back on the field.

Place a mark in the field and have the girls stand about 20 feet away. Place a cone about halfway and, one at a time, have the girls run around the cone and to the spot (running around the cone teaches them to take an angle to a fly ball). While they are running to the spot, stress the importance of running with the glove down. Running with the glove up causes them to drift and move with the ball, instead of beating it to the spot.

Finally, make sure they're running on their toes. If they're pounding heel first or running flat-footed, the ball will look like it's bouncing up and down.

Begin throwing/hitting fly balls. Start in a stationary spot. Then work the girls from left to right, and right to left. Have them run to the spot and throw the ball to that spot. Then have them work back - looking over one shoulder, then the other. Finally, work on coming in, which is the easiest for the kids.

Important: When doing the 'spot' drills, throw/hit the ball to the same spot each time (the girls will become comfortable more quickly this way). As they become more proficient, you can vary the spots. Finally, employ the blind spot drill. The player steps out with her back to you. You throw/hit the ball and yell, 'Now!' She turns, locates the ball and run to that spot. Stress the importance of calling for the ball. Teach the girls to scream 'Mine!' because 'I got it!' can sometimes sound like 'You got it!' Hold a contest to see who can scream the loudest. Repetition is the key. The more fly balls the girls see, the better they'll get at judging them. Mastering this skill may take a while for them.

Also, an outfielder leaves no base uncovered. If something is happening in the infield and the third baseman is not covering the bag with a runner on base, it's the left fielder's responsibility to get there. Example: There's a runner on first. The batting team bunts. The third baseman fields the bunt, the shortstop covers second. A smart coach will have the runner continue to third. Who's there to cover? The left fielder. OUT!
Instruct right fielders to look to throw to first base on any ground ball that comes their way.

Conclude the drills by lining them up in the outfield and throw them fly balls. Tell them that practice can't end until each kid catches the ball in sequence without a drop. Move from one end to the other. If someone drops the ball, start over. If you can't get through the line, have the kids select one person to make the catch.

Coaching Points:
While you're working on outfield play, you can have a hitting station going on, where one of the coaches works with the girls on hitting off a batting tee, which is important for getting young hitters to develop good mechanics and to swing level.

Two-Tee Batting Drill: Set up two tees, one that would be set at the front of the plate and another at the back of the plate, anywhere from 6 to 10 inches higher than the front tee - depending on the height of the girl. Have the girls step and swing. Focus on the hitters bringing the hands straight down and to the ball. This will keep them from dipping their shoulder or dropping their hands. If they do, they'll strike the back tee.

After the players get some water, gather them together. Congratulate the kids for learning another skill. Let everyone know the next practice time. Follow up with an e-mail to the parents, letting them know that you will be teaching sliding at the next practice. 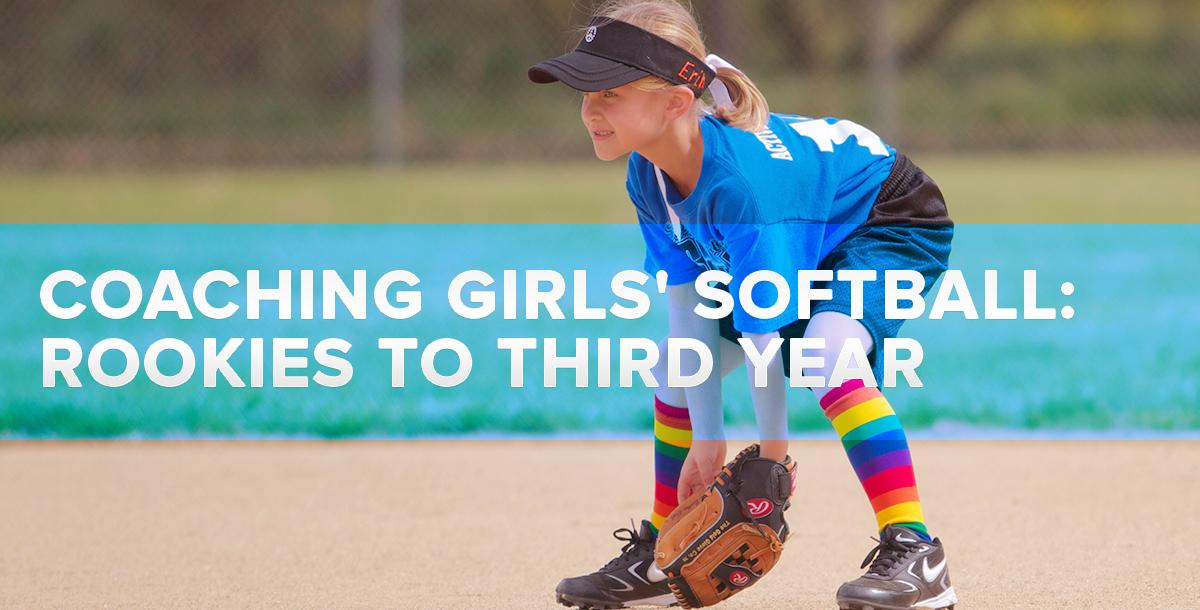 Starting out as a softball player is no easy task. There are many elements to the game and it can be overwhelming without the right guidance. Coach Jodie Ricciardi makes the process of coaching players at the rookie level easier with 75 softball drills, skills and coaching tips developed for beginner and intermediate girls' softball players. This collection of instructional video courses provid...