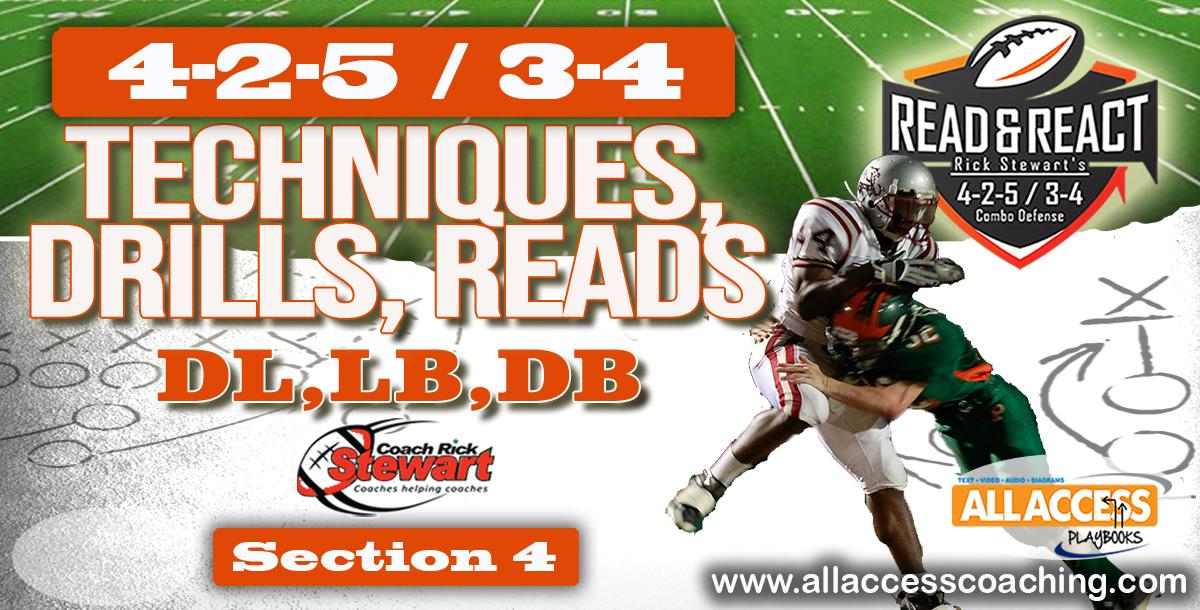 This is SECTION 4 of the Complete, 300-page playbook

Philosophy leads into the 9-step progression of what a D-Lineman must master on every play:

The next secion is STIMULUS-RESPONSE versus all the above mentioned blocks.

Over 30 drills to use during your INDIVIDUAL sessions, followed by drills to do in group sessions

Stewart keeps it simple:  Linebackers only have to learn TOUGH, SCRAPE, and FAST techniques versus the run.

Backfield Flow is broken up into FULL, SPLIT, and COUNTER

How to defeat Seven Basic Blocks

Pass Drops vs Hook/Curl and great detail on how to defend shallow crossers, including Tight Ends

31 Individual Drills plus 2on1 and 6vs4 Group Drills

In the 425 this position plays the traditional Outside Linebacker, same as in the 4-4, but also has to be able to drop back and play a Quarters Safety.

All Run Fits and Pass Responsibilities are broken down by if there is 1, 2, or 3 receivers on your side.  This makes it easy for players to grasp.

DRILLS include defeat blocks, pass coverage, Re-Routing, and Rushing off the Edge

Great detail on how to get "in-phase" versus every route from the 1, 3, and 5-step drop.

Then the manual goes over 2 defenders vs 2 receivers and how to communicate.

Combining Spread, Option, Wing-T and Traditional Run and Pass Into One Offense by Jerry Campbell
Views: 4973
$22.95