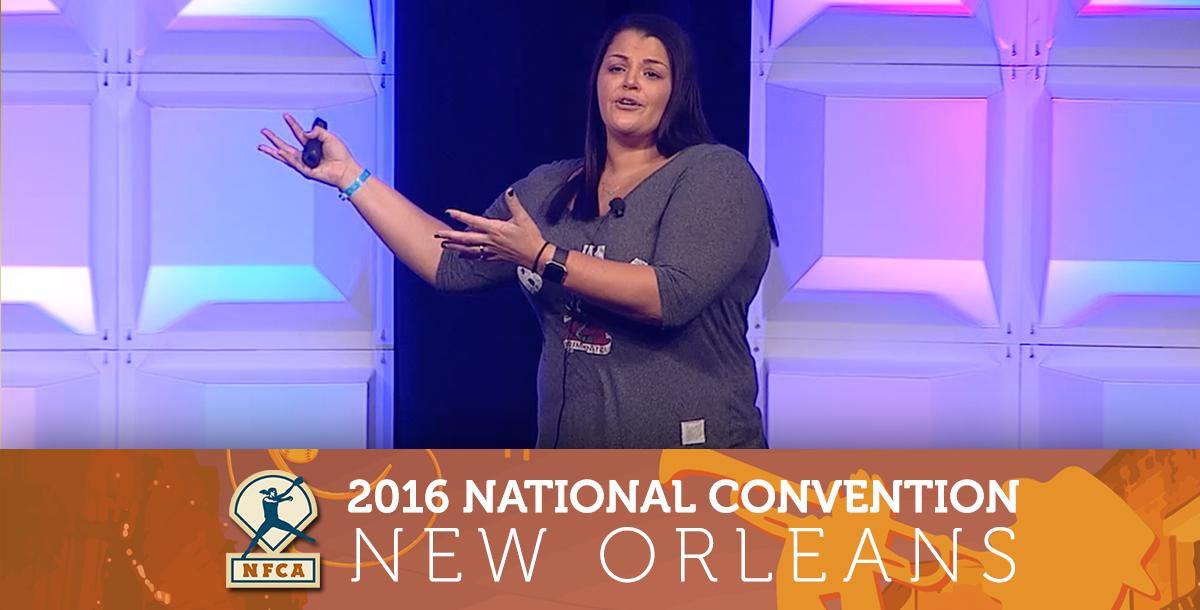 1 The Transition From Pitcher to Pitching Coach 52:11 2 Presentation Handout

Stephanie VanBrakle Prothro enters her sixth season at the University of Alabama as the team's pitching coach.

In her first season guiding the Alabama pitching staff, she helped the Crimson Tide win the program's first national championship. Behind the right arm of Jaclyn Traina, the 2012 team rolled through the postseason, winning the Southeastern Conference regular-season title for the third straight year and then claiming the SEC Tournament title before advancing through the NCAA Regional and Super Regional rounds and finally capturing the coveted national championship.

VanBrakle Prothro was instrumental in the development of Traina through her four seasons at Alabama (2011-14). In her first season as the ace of the staff, Traina was named an NFCA first team All-American and the SEC Pitcher of the Year. Traina led the nation with a school record 42 wins and struck out 361 batters, another Tide all-time best. The following season in 2013, Traina again earned NFCA and Easton All-America honors. In Traina's senior season, she was named SEC Pitcher of the Year and became just the third player in Alabama history and the ninth in SEC history to surpass 100 career wins, ultimately finishing with 103. Traina is just the fifth four-time All-American in Alabama history and is the only one to earn three First Team accolades (2011, 2012, 2014).

VanBrakle Prothro was named Alabama's pitching coach on July 5, 2011, returning to Tuscaloosa after spending one season as the head coach at Samford.

Prior to serving as Samford's head coach, VanBrakle Prothro spent the previous two years as the head coach at Birmingham-Southern College. She posted a record of 57-14 in her two seasons with the Panthers, for an impressive .803 winning percentage.

In her first season as a head coach in 2009, VanBrakle Prothro led the Panthers to a 32-5 record. The team broke 13 program records, including the mark for wins in a season. Her first team posted a .364 team batting average and 1.19 ERA. VanBrakle Prothro's 2010 team then finished with a record of 25-9 overall and 12-4 in the Southern Collegiate Athletic Conference.

Prior to becoming head coach at Birmingham-Southern, VanBrakle Prothro spent the 2008 season as an assistant coach on the BSC staff. That season, the Panthers earned a 32-28 record for the first 30-win season in program history. She also helped coach four All-Big South Conference players and two CoSIDA Academic All-District honorees.

VanBrakle Prothro played professionally in the National Pro Fastpitch (NPF) league for the Philadelphia Force prior to being hired at Birmingham-Southern. She also served as a 2007 student assistant coach at her alma mater, with the Tide going 55-10 during that season.

During her stellar career at Alabama from 2003 to 2006, VanBrakle Prothro helped the Crimson Tide win its first Southeastern Conference regular-season title in 2006 plus SEC Tournament championships in 2003 and 2005. She earned SEC Tournament MVP honors in 2005 and was named SEC Pitcher of the Year in 2006.

A native of Chambersburg, Pa., VanBrakle Prothro was named a NFCA second team All-American in 2005 and 2006. She was named SEC Pitcher of the Year and was one of 10 finalists for the Collegiate Player of the Year as a senior in 2006. She also was named to the SEC Honor Roll and the Academic All-SEC Team all four of her years at Alabama.

Very fine presentation by Stephanie. Great drill work & it's all there to see as her presentation was covered well by the camera. Lots of good ideas for really working with & challenging pitchers. I would pay to see further presentations made by her.

The Curve & Screw Ball For the Younger Pitcher by Jerry Johnson
Views: 2936
$20

The Rise Ball For the Younger Pitcher by Jerry Johnson
Views: 2505
$20

The Drop Ball For the Younger Pitcher by Jerry Johnson
Views: 2599
$20

You just booked "The Transition From Pitcher to Pitching Coach"