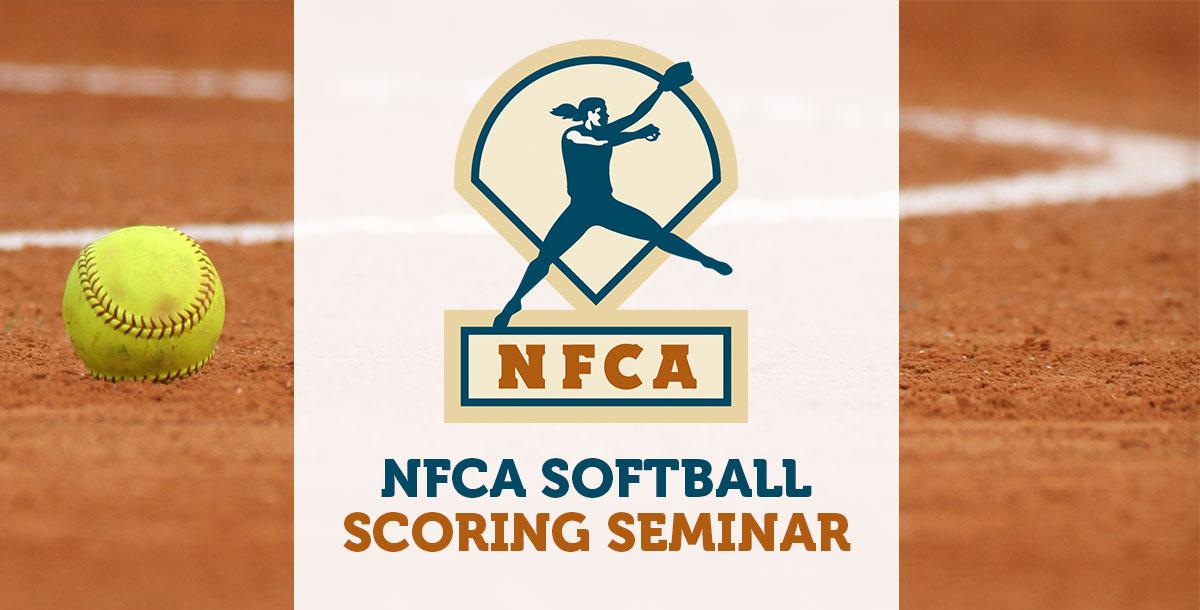 If you have been looking for a program to help you accurately score a softball game, your search is over!

The NFCA Softball Scoring Seminar is a new, useful tool for the fastpitch softball community. During every fastpitch softball game, someone is behind the scenes keeping score. It is our goal at the NFCA to develop relevant programs to grow the game and "How do we score a softball game?" is a question continually asked by many people involved in the sport. We created this course to provide an avenue for interested parties to learn to score correctly.

This project originated from our NFCA All-American committees as consistent and accurate scoring is critical to ensure a quality selection process.  It is designed for coaches, sports information personnel, players, parents, and anyone else who wants to learn how to accurately score a game.

We invite you to watch this collection of videos and presentations created by various scoring experts from across the country.

Dave Hines joined the NFCA as its Manager of Media Relations in November 2013, and became the Director of Publications the following year. A native of Kingston, N.Y., Hines spent April 2001-November 2013 as the assistant sports editor of the Daily Freeman, where he assisted with day-to-day management and production of the newspaper, including writing, editing, layout, photography and video for use in print and online. From September 1993-April 2001, he was the sports information director at the State University of New York at New Paltz, where he was solely responsible for managing the media operations of a 20-sport NCAA Division III athletic program. Hines graduated with honors from the State University of New York at New Paltz with a bachelor’s degree in journalism with an emphasis in public relations.

Matt Smith was named an assistant communications director at Nebraska in February of 2008, after previously serving for more than four years as a student and intern. Smith has spent 10 seasons as the primary communications contact for the Nebraska softball program, after joining the athletic department as a student assistant in 2003. He spent nearly four years as a graduate intern before being named to a full-time position. In his duties as the softball media director, Smith is responsible for the production of the media guide and maintenance of the softball page on Huskers.com, as well as serving as official scorer for all home games. In addition to his duties as softball communications director, Smith works with Huskers.com and assists and travels with football. For the past three years, he has also coordinated the production of Nebraska's official game-day football program sold inside Memorial Stadium.

Doug Meffley began his Northwestern career as an athletic communications work-study student in 2002 and has worked his way up to his current position of Athletics Director of Digital and Social Communications. Meffley and his staff have oversight of NU athletics content strategies, serving as a liaison among marketing, communications and ticketing. He also oversees NUsports.com, NU's athletics social media efforts and remains the primary communications contact for Northwestern men's golf and softball.

Scott Moriak has worked closely with FSU Sports Information since 2004 when he became a member of the statistics crew for the men's and women's basketball programs. He also served on the official stat crew at the ACC Women's Basketball Tournament in Greensboro, N.C. from 2005-10. In December 2008, Moriak began an internship with FSU sports information working primarily with the women's basketball and baseball teams. He served as an official scorer at home baseball games from 2009-13, controlling the live stats operations on gametracker and other media sites.

Jason Bryden was named the Assistant Sports Information Director at Washington College in July 2006. His title changed to Coordinator of Athletics Statistics and Media Services in the summer of 2013. In his new role, Bryden serves as the lead statistician for all of Washington College's 17 varsity sports, the chief statistical historian of the department, and as the primary liasion between members of the media and the College's coaches and student-athletes.

I found this course to be highly informative, especially the rules and regulations part, and will be sharing with my ladies. Thanks NFCA:)

I feel alot more confident with scoring because of this course.

I think the unusual plays section is particularly useful for first time scorers.

How to Throw a Softball by Jim Stricchiola
Views: 4749
FREE