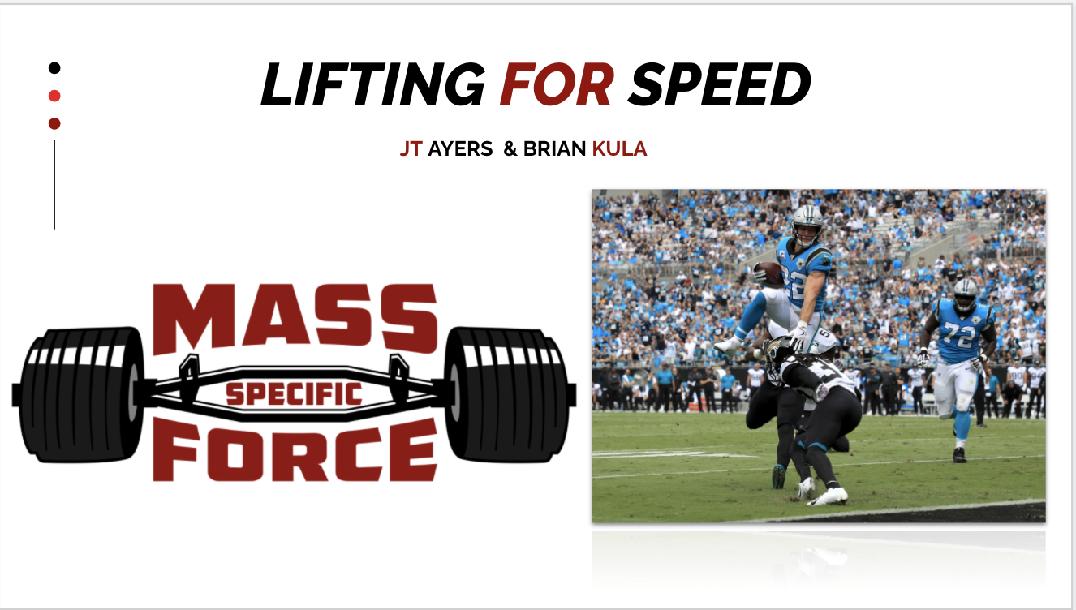 "Mass Specific Force" is a unique, simple, and extremely effective approach to lifting weights for increasing speed.  It is applicable to many sport disciplines, especially those where speed is a key performance indicator.

In this distinctive and radical approach to the weight room, the training goal is to increase strength levels without increasing body weight.  The increase in force applied to the ground in relation to body weight improves stride length and stride frequency...the holy grail to running faster!  This system of lifting has directly benefited some of the top athletes in the NFL, NCAA, Olympics, and High School level athletes.

Efficiency is the key!  Minimum time, minimum equipment while accomplishing the goal of large strength increase with minimal weight gain!

Coach Kula has worked with thousands of athletes in his career as a track & field, sport performance and football coach. He has coached multiple National Champions, All-Americans, Gatorade Players of the Year and State Champions in a variety of sports.  Kula has 22 years experience in the athletic development of athletes at all levels from youth to professional. He earned his Bachelor’s degree in Kinesiology from UNC in 1996 and began his professional career in the same year. In addition to many years as a head track coach and architect of numerous championships and records, Kula also coached football and operated strength and conditioning programs.  He directed all facets of strength, speed, agility, conditioning, testing, recovery and nutrition.

Kula has been a presenter at coaching clinics for speed development and training programs in a number of states and consulted for various programs around Colorado.  In 2002, he founded Advanced Training System, a sports performance business.  ATS served youth, college and professional athletes in a multi-sport training program. The program was highly successful in the development of athletic performance for many years. Coach Kula has worked with Division 1 athletes from over 25 universities across the country including notable local athletes Christian McCaffrey - #8 Overall NFL Draft Pick ’17 (Carolina Panthers), Anna Hall - US Record Heptathlon/Pentathlon ‘19 (Georgia), MaryBeth Sant – US #1 100m ‘13 (Oregon/CSU), JT Scheuerman - US #2 400m ‘06 (Baylor) and many other professional athletes.

Most recently while at Valor Christian high school, Kula served as an athletic director, track and football coach. His passion and success for the development of athletes to maximize their potential has been recognized at the state, regional and national level. As an athlete, Kula was an accomplished Decathlete at the University of Northern Colorado earning All-American honors and played wide receiver for the football team. He was inducted into the UNC Hall of Fame, class of 2014.

In 2019 the Boys 4x100 team placed 4th at the CA State Finals and ran the 2nd fastest 4x100 mark in Orange County History (the fastest was run by Trabuco the previous year). The Boys 4x400 team also placed 4th at the CA State Finals, running a new school record and 7th fastest 4x400 mark in OC History. This past season, even cut short, the Boys team were crowned 2020 CA State Dual Meet Virtual Champions in a tournament hosted by Milesplit CA.

Coach Ayers received his B.A in History from Cal Poly San Luis Obispo, and his Teaching Credential and Masters in Coaching and Athletic Administration from Concordia University, Irvine. He is currently the Executive Director of CoachAyers.com, has published work in SimpliFaster.com, and teaches full time at Trabuco Hills High School.

Good recap on what I've been studying and implementing for a while now myself. Great guys with a ton of progressive knowledge and experience to offer!

Coach Ayers & Coach Kula do a tremendous job of breaking down and explaining the details of their weight program. You need very little equipment and is something that a day 1 beginning coach can implement today. I'm hoping they do one of these for football athletes!

Well organized and easy to implement for coaches of any ability level. Really will help with all athletes of any skill and ability. Would be really easy to implement at practice down on track or field. Minimum equipment and coaching needed.

Great course! every track coach and even football coaches (I am both) should check out.

What an amazing start to the New Year! Brilliant work by JT & Brian. I am so pumped to try this on myself & my team. Awesome stuff guys!

This is great stuff. Thank you guys for doing this. So much great information, appreciate you sharing. Really excited to implement this.

Not as much content/programming as I was expecting for the price.

You just booked "Lifting for Speed"